Two weeks ago I made a mathematical discovery. I am not a mathematician, but I enjoy fiddling with numbers and spreadsheets, and I had been playing around with a Galton Board simulation for an animated Chinese New Year greeting card I was designing. This card involved chickens laying eggs onto a Galton Board with ten bins at the bottom to collect those eggs. 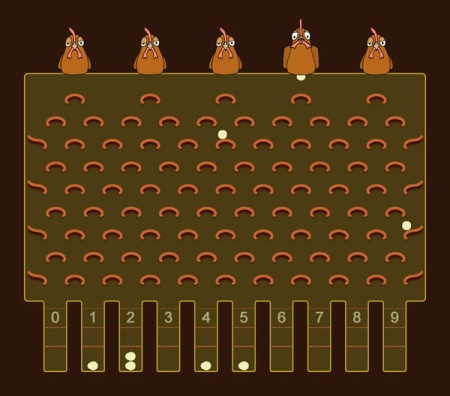 The Galton Board – a vertical board with lots of pins that make balls that fall through it follow a random path – is known for having those balls exit at the bottom in the classic bell curve of the binomial distribution. And sure enough, when I simulated this with only the chicken at the centre laying 1000 eggs, that is what I found.

But I wanted a flatter distribution of eggs, so I decided to add more chickens and to close off the sides of the board. This had the desired effect, and I got quite an even distribution of eggs across all ten bins. Below is the result of a simulation of 10,000 eggs launched randomly by the five chickens above.

This was good enough for the purpose of my eCard, but then I was intrigued by this flat distribution and started to investigate the actual probabilities of an egg ending up in each bin. A mathematician could probably whip up some simple formula to work this out, but my approach was to count every possible path of an egg and work out its probability. (Fortunately, with some strategic copy-and-pasting in a spreadsheet, this is easier than it seems…) I will spare you the details of my calculations, but the punchline is that the probability of any of the ten bins receiving an egg is exactly one tenth across all the bins! In other words, the distribution of the eggs exiting my 5-chicken Galton Board is completely flat! 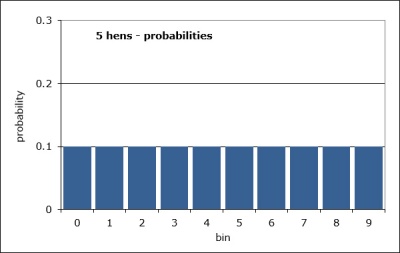 That really gave me a punch. I had not expected that, and a Google search for anyone else describing something similar turned up nothing. So, I do not know if this is new to mathematics, but even if it is not, discovering it for myself gave me a real thrill. Tinkering with one thing and unexpectedly discovering something else is always exciting!

Discover the joy of playing with numbers for yourself at the Festival of Numbers on
11-19 March 2017 at the Science Centre Singapore!