This series of articles has been adapted from [Mind Matters in Children] by Dr Kenneth Lyen. It delves into both the normal as well as the abnormal functioning of a child’s mind, and gives practical advice on how to manage children’s mental health and problems like ADHD, dyslexia, autism and depression.

One mother complained that her son’s Singapore kindergarten teacher told him that he coloured the sky wrongly, and that there was no such thing as a green sky. Another mother informed me her daughter was criticised by her primary school teacher for asking too many questions. I could go on and on with more examples.

Is there a problem with Singapore’s educational system? Does this restraining approach dampen creative thinking?

Creativity is the ability to generate new and imaginative ideas that can have potential value or help solve problems.

How do we assess creativity? The most popular test is the Torrance Test of Creative Thinking (see below). Psychologist Robert Sternberg criticised current methods of assessing creativity, saying, “Creativity testing, as it is now done, is often based on a defective assumption that different kinds of creativity can be compressed into a single unidimensional scale.” Trying to decide which ideas are more creative than others is also very subjective. Nevertheless, creativity testing is still being carried out.

The Torrance Test is the most popular test, and it evaluates divergent thinking and problem-solving skills. There is a verbal test where one guesses the causes or consequences of a given scenario, listing unusual uses of an object (eg a toy), and imagining “just suppose…” ideas. Then there is a visual test of creativity, where one is asked to draw something original when given marked cues, or complete a picture when given only a shaped line.

Creativity is one of the most complex of human neurological processes; indeed, it defies precise definition and objective measurements. If we cannot accurately assess what is creativity, then any neuroscientific study is subject to challenges by critics. Broadly speaking, creativity most likely has a genetic and an environmental aetiology. There are families of creative artists, music composers, writers, research scientists, and other creative professions. Studies of identical and fraternal twins have shown that there is a genetic component to creativity. Gene polymorphism studies have shown that genes play a role in divergent thinking. In addition to genetic causes, environmental factors also play an important role in creativity. Parents, teachers and mentors can certainly inspire an individual to explore creative activities.

Charles Limb and colleagues conducted a number of studies on music improvisation and rappers spontaneously conceiving new words, while their brain activities were recorded in real time by functional magnetic resonance imaging (fMRI).

He found that there was increased activity in the medial prefrontal cortex of the brain, an area responsible for stimulus-independent internal generation of ideas. He also found reduced dorsolateral prefrontal cortex activity, a part of the brain responsible for self-awareness. By decreasing activities in this part of the brain, one loses a sense of self, of time and place, and enters a state of daydreaming, meditation or hypnosis. This removes the inhibition by the self-awareness filter and allows for free flow of information.

Nicola De Pisapia and colleagues found equivalent fMRI activities and brain connections in professional visual artists. They concluded that creativity can be viewed as a careful balance between top-down executive control and more free-thinking mind-wandering processes.

These and other studies looking at brain activities and network connections in creative people are helping us explore the neurophysiology of creativity. Hopefully this can enable us to discover the brain and body exercises, the optimal diet, and which living environments are best in boosting creativity.

Besides fMRI, the EEG of creative people have been studied and quite consistently, those engaged in creative activities or thoughts activate alpha brain waves.

How to Stimulate Creative Thinking

Who are the giants in creative thinking viewpoints and techniques? Below are some of them. Each promote their preferred method of creating new ideas. No one method is wrong, and indeed it is likely that creative people may employ several techniques to arrive at their own brainchild.

Alex Osborn is regarded as the father of brainstorming, an idea he launched in the book “How to Think Up”, published in 1942. Brainstorming is a group activity where participants share ideas the moment they come to mind. It continues to be an important part of creativity, but nowadays people can meet online if they cannot interact face-to-face.

Divergent thinking is an approach where you try to generate as many different ideas as possible within a time limit. Some people break down a concept into its individual components so as to gain deeper understanding into the issue, while others prefer spontaneous free-flowing random generation of ideas. Once many ideas are engendered, one can then turn to convergent thinking. You now examine each of these proposals and use analytical critical thinking to select the best ideas.

In 1967 Edward de Bono promoted JP Guilford’s divergent thinking in his book “Lateral Thinking”, which employs indirect and creative approaches via reasoning that is not immediately obvious. In 1985, he published the book “The Six Thinking Hats” where he proposed six different ways of analysing a problem, using conflict-free parallel thinking processes. These 6 ways of viewing problems can help stimulate creative thinking.

Tony Buzan popularised the concept of “Mind Maps” where one visualises one’s thoughts, which helps in the understanding of how ideas relate to one another. This technique has been found to boost one’s creativity because drawing concepts help some people clarify their thinking and generate more ideas.

e) Mihaly Csikszentmihalyi (b1934): The Flow

Mihaly Csikszentmihalyi described The Flow in 1975 as “being completely involved in an activity for its own sake.” One is so passionately focused on a singular idea that the individual is totally immersed and is oblivious of time and of themselves. This state of mind helps remove constraints on thinking, and during this period, some of the best creative ideas flow freely.

Arne Dietrich emphasized the importance of the predictive aspect of neurological function which he placed as the foundation of creative thinking. All new ideas are influenced by older ideas. By challenging established orthodoxy, and reaching out to the future, imaginative original concepts can be generated. Dietrich also devised a matrix of the different types of creative thinking.

g) Drew Boyd and Jacob Goldenberg: Thinking Inside the Box

Going against the grain, Drew Boyd and Jacob Goldenberg argued that creative thinking is best expressed by using familiar existing concepts and juggling them around to churn out new ideas. This counterintuitive appears to be a potent and effective approach to creativity.

In 2013, Keth Sawyer suggested the 8 stages of creativity, expanding on the earlier classification of 4 stages (Wallas 1926). This compilation of the steps towards creativity may help some people plan and expand on the techniques employed to create new ideas.

There are numerous suggestions in the media on how to improve one’s creativity. Unfortunately, most of the recommendations are not based on scientific evidence. However, with the application of function magnetic resonance imaging (fMRI), positron emission tomography (PET)scans, and electroencephalography (EEG), there are now more publications providing objective evidence on which advice can enhance creativity.

Many studies have linked creative function during sleep, especially during rapid eye movement (REM) sleep, when a person is dreaming. 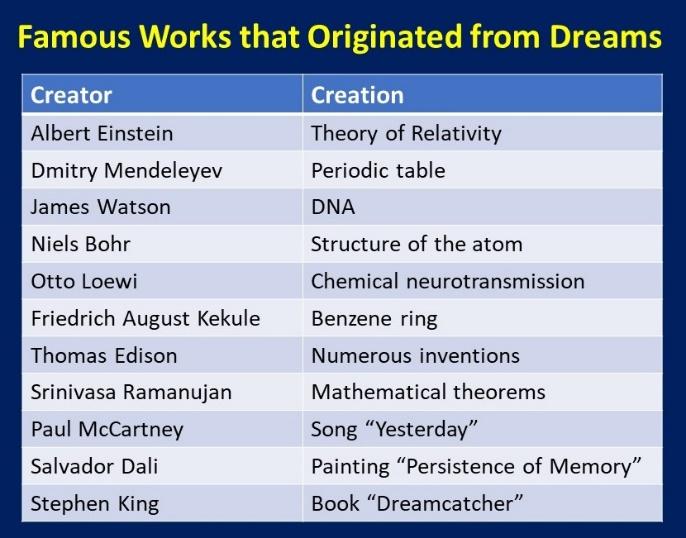 The people listed on the table above assert that dreams precipitated their ground-breaking ideas. But the effect of sleep on creativity is rather complicated. Studies have shown that insomnia may actually increase creativity in some people. Perhaps one possible explanation is that to benefit from REM sleep that generates creative thoughts, one needs to wake up in the middle of a dream. Insomnia might therefore help in this situation.

We are now entering an area of unsupported scientific evidence of only our own personal anecdotes. If cracking jokes is a form of creativity, then obviously those individuals who have a good sense of humour are immediately labelled as creative. It has been observed that both introverts and extroverts can be creative. This makes the observation bizarre, since everybody belongs to one or both these groups. However, there do seem to be some personality traits associated with creative persons. These include people who tend to daydream, have an intense curiosity, are quite eccentric, and are fiercely independent thinkers.

Should we herd all creative people into one pack of cards? Are music composers, artists, designers, choreographers, authors, poets, teachers, research scientists, inventors, entrepreneurs, computer programmers, chefs, etc, all different? Or do they create alike? Are there different styles or modes of creativity?

Habits and Personalities of Creative People

Having worked with creative musicians, writers, painters, research scientists, computer programmers, chefs, etc, I realised that each individual is different. Some are very sociable and love meeting people, while others are introverted and avoid socialising; some behave like a child, while others are very formal; some have a good sense of humour, while others have none; some work assiduously and meet deadlines, while others are procrastinators and often fail to complete their work on time. There is some evidence that people with attention deficit hyperactivity disorder are more creative. I have not seen any differences in the ratio of creative males to females, no particular preponderance of any IQ level, ethnic groups or belief systems, nor any of their love preferences. In other words, there is a rainbow of habits and personality types among the creative community. They cover the whole of humanity.

We are currently facing many major problems in the world, including the Covid-19 pandemic, other infectious diseases, climate change, religious and political wars, starving people, etc. To solve these problems, we need to find new creative solutions. One of the fundamental ways of increasing the number of creative people is through education.

There are many criticisms of the current educational system in many countries. They range from overloading students with too much factual information; shoving too many tests and exams down their metaphorical throats; comparing students with one another so that not only the students become over-competitive but their parents as well; poor interactions between teachers and students so it is often a one-directional teaching style; spoon-feeding students with useless facts; unable to balance science, arts, sports and social activities; poor timing of schooling so students are often half-asleep in class; class sizes that are too large. There are probably many more criticisms to evaluate and hopefully can lead to improvements in the current educational system.

The Covid-19 pandemic has had good and bad effects on creativity. Theatres, live performances, art museums, education and travel have been restricted in many countries, and this has had a detrimental effect on the creative industries associated with these art forms. But the lockdown and working from home have also had some unexpected creative results.

In these past couple of years, there has been a sharp rise in the number of postings on all social media platforms, including TikTok, Instagram, Meta (FaceBook), YouTube, Twitter, etc. With such platforms gaining traction, it is easy for people of all age groups and demographics to unleash their creativity, even in the midst of a pandemic.

Mercier M et al. Covid-19: A boon or a bane for creativity

Manzano O, Ullen F. Genetic and environmental influences on the phenotypic associations between intelligence, personality, and creative achievement in the arts and sciences

Beaty RE. The creative brain.

Berlin H. What time feels like when you’re improvising.