Afraid of an incoming asteroid? Not to worry, we have the Earth’s mightiest astronomers keeping a look out for us! The risk of an asteroid impact is very real, which is why the United Nation has sanctioned 30 June as Asteroid Day.

It is a day to raise public awareness about the risk of hazardous asteroid impact. Asteroid Day is held on 30 June to mark the anniversary of the Tunguska impact over Siberia, Russian Federation in 1908. This was the largest asteroid impact in our recorded history.

Every few months, we are bombarded by the news of an asteroid nearly missing earth. We somewhat understand the dangers that asteroids could bring from movies or the craters they left behind on Earth. However, the answer to ‘how worried should we be about a potential asteroid impact’ depends on what you would consider as a threat.

Having a better understanding of asteroids might ease some of your worries!

What Exactly Is An Asteroid?

According to NASA, asteroids are leftover fragments from the early formation of our solar system that happened 4.6 billion years ago. These ancient space rocks come in many different shapes and sizes. The largest asteroid, Vesta, is a whopping 530 km in diameters. For reference, that is roughly the distance between Singapore and Kuala Lumpur.

The shape and size of the asteroids is not the only thing that makes each asteroid unique. Over 150 asteroids are known to have their own moon. On the other hand, we have binary asteroids which are two asteroids of roughly the same size that have partnered up and orbit each other. There are even triple asteroid systems!

Asteroids exist all over our solar system but can mostly be found in the Main Asteroid Belt between the orbits of Mars and Jupiter. The orbit of these asteroids can be affected by several factors. For example, a shift in Jupiter’s massive gravity or knocking into Mars and other space objects in its orbit. This causes fragments to be thrown out of orbit and potentially encounter earth.

How Dangerous Are Asteroids Impacts?

The ones that are considered potential hazards are called Near-Earth Asteroids. These are asteroids that orbit a bit too close to Earth. However, Kelly Fast, Near-Earth Object Observation Program Manager at NASA’s Planetary Defence Coordination Office, can assure you that there are no asteroids that pose a threat to Earth as of now.

Even though there are no potential hazardous asteroid heading our way, you would be surprised to learn that the Earth is bombarded by space objects constantly. In fact, we are hit with roughly 100 tons of space objects every day. Fortunately, it is mostly made up of dust-sized particles that burn up and create meteors.

At the same time, the Earth is hit with around 30 small asteroids every year that turn into epic fireballs in the atmosphere. Sometimes these asteroids fragments into meteorites while crashing into the ground but they usually do not cause any major damage.

It is important to note that there are still risks to asteroid impacts. For example, an asteroid of roughly 20 meters in diameter exploded over Chelyabinsk, Russia in 2013. The result of this explosion causes a shock wave which shattered windows and injuring over 1000 people nearby.

Therefore, it is important to keep up with the latest development in asteroid-related news and research. This way, we can constantly be ready for what lurks beyond our atmosphere.

What Are The Latest Efforts In Asteroid Lookout?

Every year, astronomers and scientists are constantly finding new ways to detect and measure the potential threat of these Near-Earth asteroids. Here are two noteworthy space programs to keep your eye on! 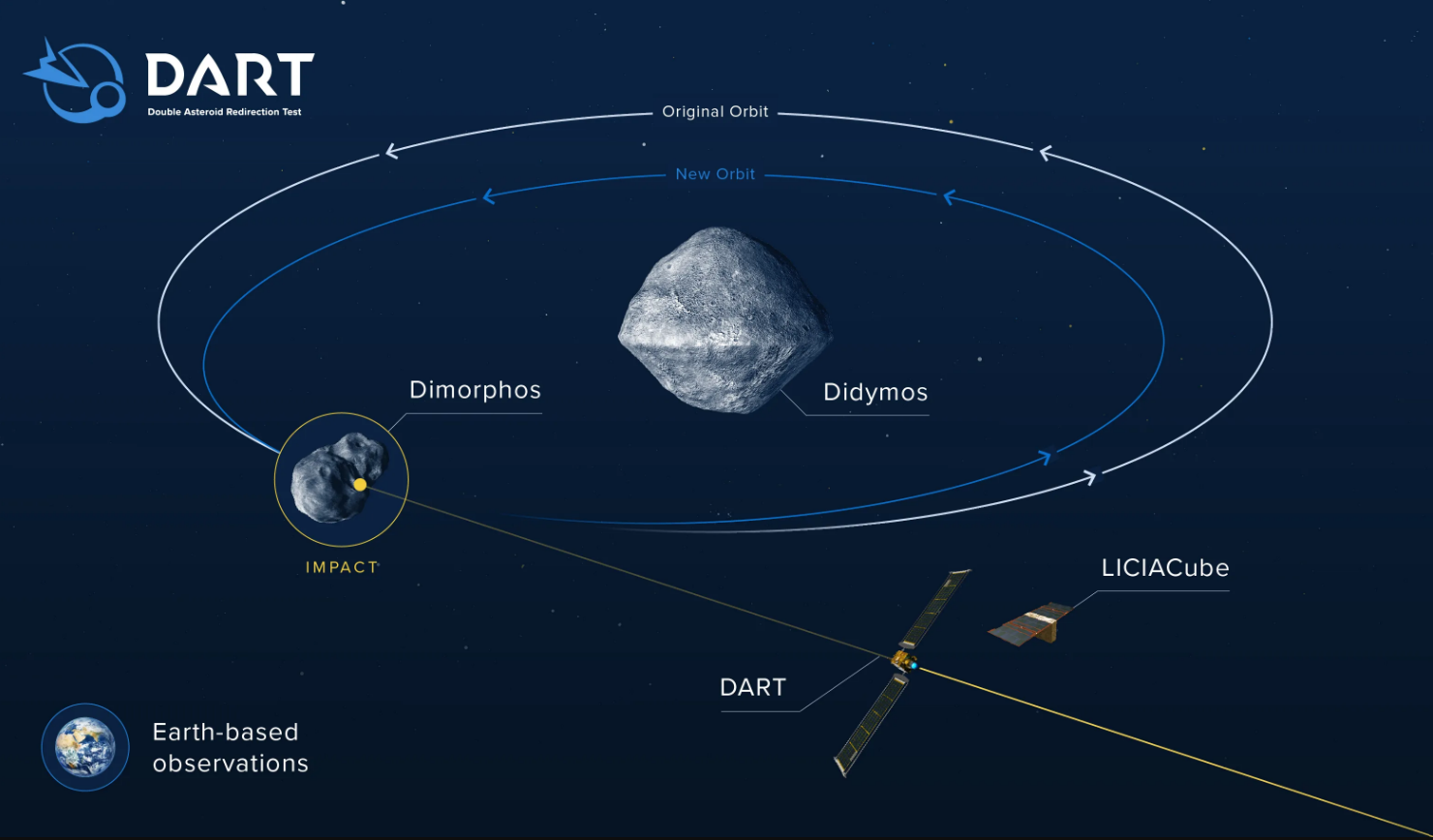 Infographic showing the effect of DART’s impact on the orbit of Didymos B. Credit: NASA/Johns Hopkins AP

NASA is currently working towards changing an asteroid’s orbit by crashing a probe into it. DART was launched last year in November 2021 as the world’s first full-scale planetary defence mission. This September (2022), the 610kg DART probe will be crashing into asteroid Didymos’s moon at approximately 22, 500 kilometres per hour to change the asteroid’s orbit as proof of concept.

This will help us determine if we can deflect threatening asteroids like asteroid Bennu which has a one in 2,700 chance of collision with Earth in 2182.

THOR, not to be confused with Thor Odinson the Norse god, is an asteroid identifying algorithm developed by Asteroid Institute-supported scientists at the University of Washington. Together with Asteroid Discovery Analysis and Mapping (ADAM) platform, it is used to discover previously undetected asteroids and calculate its trajectories.

According to Ed Lu, Executive Director of the Asteroid Institute, it is crucial to understand our solar system through asteroid discovery and tracking as it enables the development of space and protecting the earth from asteroid impacts.

In other words, THOR and ADAM helps us to reduce the chances of discovering an asteroid moments before it hits the Earth’s atmosphere. This has happened five times in our recorded history with the recent occurrence being on 11 March 2022. Thankfully, the asteroid (2022 EB5) which was estimated to be only 3 metres wide, crashed and burned up in the earth’s atmosphere.

As of early June 2022, THOR and ADAM has identified over 100 asteroids that was undetected from archived images of the sky.

So, Should We Still Worry?

There will not be a potentially hazardous asteroid coming our way anytime soon, so you do not have to lose sleep over an asteroid. Rest assured that the astronomers and scientists all over the world are constantly working on ways to mitigate potential asteroid crisis. Just look up the latest research for asteroids and you will know that our astronomers and scientists have our back!